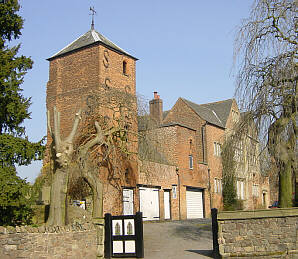 Little remains of Groby Castle except for a large mound of earth at the rear of the present Manor House known as Groby Hall. The castle mound thrown up in 1086 had a short period of use as it was demolished on the orders of Henry II between 1154 and 1189. Its use as a symbol of power would have been more than effective against a Groby population of only 16 at the time.

Groby Manor House, known today as Groby Hall is a Grade II* listed building which stands in the centre of the village. The outer shell hides a much earlier building, earlier than the red brick work of the late 15th century and the early 16th century recycled stone materials collected by both Thomas Grey’s, marquis of Dorset 1st and 2nd and reused within its fabric. The house entrance is via a main doorway facing south east. The wide spacious ground floor rooms beyond the entrance very probably contain remnants of a building erected shortly after the castle tower was pulled down in 1172. William de Ferrers inherited the Groby and Bradgate Estates in 1279 and the Old Hall – footings located by Time Team in April 2010 – continued to be an administrative centre and home until the Grey family inherited the Estates in 1445.

In 1446 Sir Edward Grey became Lord Ferrers of Groby by right of his wife Elizabeth Ferrers. In the same year Sir Edward obtained a special dispensation from the Archbishop of Canterbury to have his expected child christened in the manor house chapel at Groby. Fragments of the chapel walls still remain to the rear of Groby Hall and a substantial amount of stone work under lawns indicate the footings of other buildings which formerly housed animals, workshops, men and offices which once stood close to the chapel.

The decline of the Old Ferrers Hall into a more modest farm house began around 1478 when John Bourchier – younger son of the Earl of Essex, second husband of Elizabeth Grey, left the Groby area. Thomas Grey, 1st Marquis of Dorset had begun to prepare the Old Hall for leasing sometime around 1495 but his efforts were unsuccessful. He died in 1501 and his son Thomas 2nd marquis was equally unable to lease the old buildings. Shortly afterwards however, he was fortunate in gaining additional lands within Bradgate. Thomas reached an agreement with the Prior of Ulverscroft and the Abbot of Garendon, near Loughborough, to clear their small land holdings which enabled Thomas to enlarge his small deer park at Bradgate. Thomas 1st marquis may have cleared ground there but his death and the imprisonment of his son Thomas who became the 2nd marquis severely delayed further building work.. Thomas 2nd marquis inherited some of his father’s former manors but his mother Cecily retained the bulk of the estates and the main administrative rights. Thomas, it must be mentioned, did not gain the title Marquis of Dorset until 1511, he was initially known by the lesser title of Thomas, Baron Grey of Groby.

Thomas was in Calais prison by 1507 for acts seen as treasonable by Henry VII. Even when Henry VIII came to power and issued a pardon to all prisoners Thomas was not released until late 1509. His own estate revenues were seemingly poor and he was unable to advance his building works both at Bradgate and Groby until he accepted Bishop Vesey’s exchange offer of timbers for the stone materials within the fabric of the Ferrers Old Groby Hall. (See story elsewhere in the Groby pages) Not until 1517 is there mention of the new Lodge House in the deer park by Thomas 2nd Marquis of Dorset in his own handwriting. In retrospect it must be assumed that when Edward and Elizabeth Grey (Ferrers) left to serve king Henry VI in 1446 the Ferrers Old Hall saw a little use while Sir John Bourchier, Elizabeth’s second husband was alive, then no full time use until it was eventually pulled down c1510.

With the Old Hall down and all suitable stone taken away, a new hall was built/refurbished using both brick and stone gathered from other parts of the Grey’s estates. The tiny village of Weddington, just north of Nuneaton lost its last ten houses to Thomas Grey, 1st marquis around 1495 and this may have been a source of stone for his later plans – a modern housing estate now surrounds Weddington church.

It was only when Henry VII died in 1509 and the constant surveillance on the Grey’s activities lifted that building works at Groby and Bradgate were able to get underway. 1510 and the exchange of building materials with Bishop Vesey made Thomas Grey’s wish to build at Bradgate a much stronger possibility, the running costs of such a grand house within the deer park would be catered for once his mother released his inheritance.

Briefly, his mother Cecily Bonville died in May 1529 and Thomas Grey 2nd marquis in June 1530 so Thomas 2nd marquis had very little time to enjoy his longed for inheritance. Thomas was succeeded by his eldest son Henry, Duke of Suffolk and father of Lady Jane Grey both of whom would lose their heads in February1554. The Crown took over the Grey estates and Groby Hall was reported as down and fit only for resale as building materials in 1577 – Bradgate House meanwhile had lost its floors as the wood used in the floor joists collapsed during this same period.

Building works were put in hand by Sir Henry Grey c1600 and once made Baron Grey of Groby he took up residence at Bradgate c1603. Sixty five years later the cycle of decay had started once more!

In 1668 Groby Old Hall is described briefly as, ‘much decayed’ but a William Barradall had been leasing the building since 1653 and Mr Martin of Anstey is mentioned as renting the Groby Hall, Orchard and Dowry field for £15.00 per annum in June 1679. Mr Martin was advised not to plough any part of the grounds and to provide a horse, mare and all the men’s meals at the two manor courts which a held at the Old Hall at Michaelmas (29th September) and Lady Day (March 25th) The collection of the Estate rents took place on these days also.