THE PLANNING INSPECTOR has backed the Borough Council’s decision to refuse planning permission for extended delivery hours to the Crown Crest warehouse near Desford.

Poundstretcher Ltd, which operates from the warehouse, had appealed to the Planning Inspector after its request to vary a planning condition that prevented deliveries to the warehouse outside the hours of 6am to 7pm weekdays, 8am to 3pm on Saturdays or at any time on Sundays or bank holidays was refused.

Poundstretcher had sought permission to extend the permitted hours and allow HGV deliveries up to 11pm on weekdays, up to 6pm on Saturdays as well as 9am to 1pm on Sundays.

The council had refused to extend the delivery hours, arguing that the additional hours were at times when local residents could reasonably expect some respite from the disturbance caused by the vehicles.

Local residents had also campaigned against the extended delivery hours. In his Appeal Decision, the Planning Inspector Roger Catchpole, observed a “substantive level of community annoyance already present” which “goes beyond early morning sleep disturbance” from written representations made by local residents, before going on to conclude “it was established at the Hearing that the level of intermittent disturbance that currently occurs is such that it has already caused a material change in behaviour in terms of local residents keeping windows closed or avoiding certain activities during periods when the noise is present.”

Following a two day Planning Hearing in January during which the Government appointed Inspector heard from representatives of Poundstretcher, Hinckley & Bosworth Borough Council and members of the public as well as making a visit to the site, the Inspector dismissed Poundstretcher’s appeal and backed the council’s decision to refuse the extended delivery hours.

In his report issued last week (18 February), the Inspector concluded:

The limited hours of operation … were imposed to protect the living conditions of the local community for good reason. This still holds true and the proposed variation would be inconsistent with (ensuring) that development promotes a high standard of amenity and does not undermine the quality of life, avoids the adverse effects of noise pollution on existing development and minimises the adverse effects of noise on people’s quality of life.

This is a really pleasing result for local people. There was a clear depth of feeling about the detrimental impact that these plans would have across a number of villages and communities. The collaborative way that residents, politicians, and councils worked has ensured that peoples’ voices have been heard and that the best decision for residents was reached.

I’m delighted for the residents of all the villages affected by this application, especially those in Botcheston who faced a significant amount of harm had this appeal been successful.

Myself and my ward colleagues have stressed from the outset that the damage caused by these extended hours would far outweigh any benefit. It is down to every single resident who took part in fighting against this application that we’ve been successful and the community spirit they have shown means each villager’s quality of life can be preserved long into the future.

•    The Planning Inspector’s Appeal Decision can be read in full by visiting the council’s website. 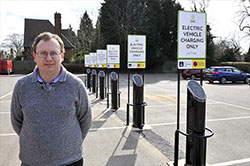 Royal fever at Charles and Diana’s Leicester visit in 1986

Where to see a waterfall within 70 miles of Leicester

What to do if a deer charges when visiting Bradgate Park