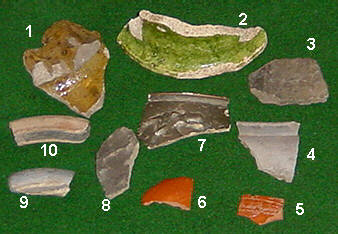 It came as quite a surprise to me 20 years ago to realise that there were humans in Groby many thousands of years ago. The earliest evidence is the 60 or so flint tools from the Mesolithic period (12,000-4000 BC) found near Martinshaw wood in the early 1980’s and which are now in the Jewry wall museum. Anything earlier will have been destroyed by glaciers as the ice age ended, incidentally leaving Groby pool behind.

Such finds are rare, you need the landowners permission to look and worse still, only an expert can identify them. There is however a much easier way of finding ancient remains. Go out into the garden! You’re not likely to find another Groby castle or many flints but more likely than not you will find that most durable of man made material, pottery. Since time immemorial, broken pots were thrown onto rubbish heaps and the heaps scattered onto the land in order to make it more fertile. Presence of quantities of pottery is accepted as evidence the land was farmed during that period and also of trade.

The most difficult obstacle you face is realising how common pottery is and then recognising the shape as different from a stone. The best time to look is after rain, preferably when the ground has been freshly dug. Wet soil tends to fall off stone or pottery quite easily.

I’ve found perhaps a hundred pieces of Roman, Saxon and Medieval pottery and a few prize pieces are shown below. Of course they didn’t look like this when I found them. Clean each bit with an old toothbrush and look at it edge-on. If the fabric inside is a different colour to the surface, it’s probably quite old pottery. Now look at the surface. If it’s shiny and any colour except red or green its probably more recent. Throw it back and look at it again in a few hundred years!

There are many different types of pottery but very roughly we tend to talk of the 3 commonest types as Roman(43-410 A.D.), Medieval or modern (post 1500 A.D.)
If it has curved lines drawn on it and/or it’s black, its probably Roman. If its grey it could be Roman or medieval. If its sandy/brick coloured it’s probably medieval. Bright green can be medieval or Roman. Shiny black pottery with purplish coloured patches is usually Midland Purple from around 1500 and is regarded as modern!

All these items have been found in Paul’s garden:

3. Roman Black Burnished (BB1) pottery. This was army issue, probably made under contract. The army insisted its troops used equipment of a certain standard and issued it to them. The soldiers had its cost deducted from their pay. This piece came from Poole in Dorset and has curved ‘pencil like’ criss cross marks as decoration. Very common, coarse, black and gritty and quite unlike modern pottery. Roman Greyware. The commonest type of Roman pottery, made throughout the Roman period. Used for storage and cooking and sometimes has soot marks on it. Like Black Burnished it often has criss cross markings.

5,6. Roman Samian. Highly polished magnificent pottery imported from central Gaul, 120-200 AD ranked second only to silver. A pattern is visible on 5. Lots of Samian was found during excavations dating to when Boudicca burnt London. She thus kindly provided a date (A.D. 60) for many designs of Samian.

7. Roman colour Coated beaker possibly a hunting cup with a stags head though it also resembles an example of a Colchester beaker depicting a chariot race The well preserved state of this indicates the soil has not been ploughed extensively.

9,10. My pride and joy. Two pieces of coarse 12th century Saxo-Norman pottery made in Stamford and of really awful quality! This is very rare as unlike the well made and much earlier Roman material it disintegrates rapidly on exposure to weathering. This is the only Saxon pottery found in Groby …so far.

For further reading – “The Landscape of a Leicestershire Parish” 1984 by Steve Woodward. 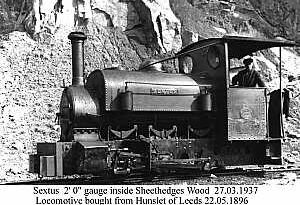