The very long search for a true likeness of Lady Jane Grey, Queen of England for just 9 days, could possibly be at an end. The 16th century portrait kept in a house at South London for many years has excited art experts, some of whom are convinced, that it is the real thing, other needless to say, are far from sure.

Is this the girl who was Queen of England for just 9 days? Lady Jane Grey was put on the thrown in an attempt to prevent the accession of the Catholic Mary Tudor, but when Mary became Queen, she sent Jane to the Tower of London where she was beheaded. It had been thought that no contemporary portrait of the ‘9 Day Queen’ survived, until now!

The case seems certain, not least because the name on the picture ‘Lady Jane’ could only be one of four people for this period in the 16th Century, but there are also clues in the decorations on her costume, the Fleur-de-Lis, (her mother the Queen of France), and a flower pattern that is the symbol of the Marquis of Dorset (who were her ancestors). 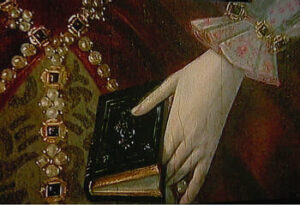 A terraced house in South London was the unlikely setting for this discovery. The wider art world has yet to pass judgment on the identity of the young woman, but the work has been dated to the 16th Century. The turbulent period of English history in which Lady Jane Grey played her brief but dramatic part has never lost its fascination. The discovery of this portrait can only add to the enduring appeal.